Ekiti State University, Ado-Ekiti has held her 2019/2020 Matriculation Ceremony through Virtual Technology. Over 8000 candidates admitted into various academic programmes in the University joined the ceremony from their various locations through ZOOM application.

In his address, the Vice-Chancellor, Ekiti State University, Ado- Ekiti, Prof. Edward Olanipekun described the ceremony as unique, being the first time the University held a virtual Matriculation Ceremony. He stated that, in order to clear any insinuation surrounding the 2019/2020 admission into the institution, the Matriculation became inevitable, despite the COVID-19 pandemic.

Prof. Olanipekun congratulated the matriculants, especially the first set of students offered admission into the Department of Nursing Science in the College of Medicine. He further advised all matriculants to avail themselves the opportunity of skills acquisition at the University’s Entrepreneurial Study Centre.

The Registrar, Barr. Akin Arogundade administered the Matriculation Oath after the Deans of the various Faculties had presented the matriculants.
Meanwhile, the Ekiti State Coordinator, Joint Admissions and Matriculation Board (JAMB), Mr. Akeem Abdulhamid has described the virtual Matriculation Ceremony as unique.

At a brief meeting in the Vice Chancellor’s office after the ceremony, Mr Abdulhamid felicitated with the matriculants, parents and guardians, adding that Ekiti State University, Ado Ekiti has one of the best Computer-Based Test (CBT) centres in the South-West region.

In his response, the Vice-Chancellor, Prof. Edward Olanipekun expressed appreciation to the State Coordinator for his support and presence at the virtual Matriculation ceremony. He disclosed that efforts were underway to equip a 1000 – seater capacity Computer-Based Test (CBT) centre in Ekiti State University, which would be operational as soon as the institution resumes fully. 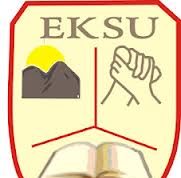