The West African Examinations Council (WAEC) has released the results of 91, 225 private candidates that sat for the 2019 West African Senior School Certificate Examination (WASSCE) in Nigeria.

The council’s Head of National Office, Mr. Olu Adenipekun, said this at a news conference to announce the results of candidates who participated in the 2019 WASSCE (Private).

Giving a breakdown of the statistics of the candidates’ performance, 49,679 candidates, representing 52.36 percent obtained credit and above in a minimum of any five subjects with or without English Language and/or Mathematics.

He said that of the total number of candidates that sat for the examination, 33, 304 others, representing 35.10 percent obtained credits and above in a minimum of five subjects including English Language and Mathematics out of which was 16, 431.

He said 9,457 candidates representing 9.74 percent were reported to have been involved in examination malpractices and their cases would be presented to the appropriate Committee of Council for appropriate action. The Council’s decision will be communicated to the affected candidates within the shortest possible time. 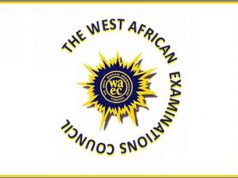